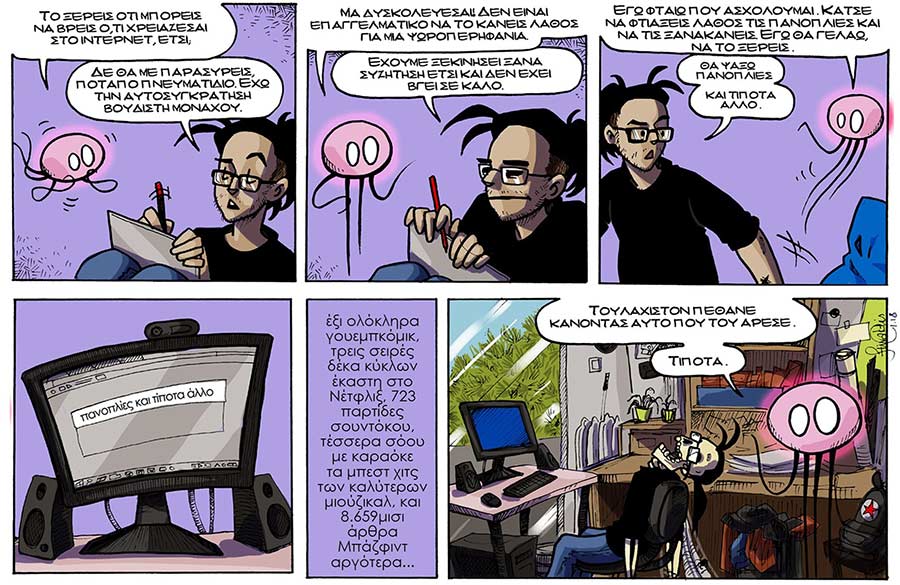 It wasn’t easy for Steve to decide on what he wanted to be when he grew up. After his failed efforts to be a Jedi knight, a Gaul warrior, and Prime Minister Barbie, he enrolled in Ornerakis School of Applied Arts and became a comic artist instead.

He’s been illustrating books since 2008 and making comics since 2011, with works such as the RPG “The Small Folk” by Fate, and the comic “Facts And Myths” in ANTIVIRUS magazine (co-created with Harry Saxon). He’s been taking part in Greek comic conventions since 2013 and in various European ones since 2016, having also spoken at a Thought Bubble Festival panel in 2019.

He’s mostly creating queer-friendly Greek fantasy comics based on folklore, mythology, and pop culture, and he’s well-known for his terrible puns, for his comics ESME (nominated for Best Self-Published Comic at the 2018 Greek Comic Awards) and JELLINKFISH, as well as his Dungeons and Dragons designs, many of which are sponsored by Wizards of the Coast.

This year Jemma Press will publish his first co-creation with Elena Gogou, SPAZORACHOULA. Lately, he’s been working on his next two or three projects, and is also desperately looking for people to play D&D with.